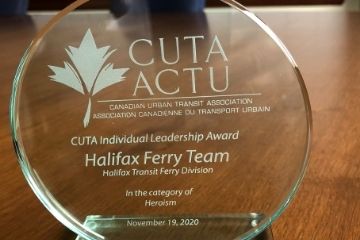 Last October, when the ferry was approximately halfway through its crossing from Halifax to Alderney Landing, the crew was notified that a passenger had fallen overboard. Once alerted, the team acted quickly to turn the ferry 180-degrees and proceed back towards Halifax to locate the individual.

Upon location of the passenger, who at this point was floating in the water with little movement, the crew began activating passenger overboard procedures, including utilizing a large rescue net. After several attempts to rescue the passenger from the deck of the ferry, Mr. Tavityan dove into the frigid water to guide the passenger into the net. The crew also proceeded with first-aid measures and called first responders to ensure they would be prepared once they docked at Alderney.

A heartfelt congratulations to the award winners – if it were not for their quick action during a crisis, combined with their training, the outcome might have been very different that day.