Celebrating an historic milestone for the Cogswell District 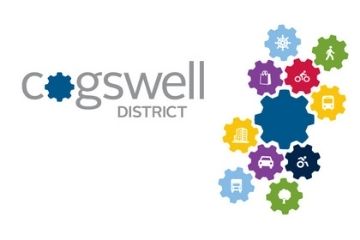 This past January, the Cogswell District project reached a significant milestone, as all major land negotiations were finalized, and the construction tender was issued.

The Cogswell District is one of the biggest city-building projects in the municipality’s history that will bring transformative change to the area’s landscape. This multi-year project will see the development of a new neighbourhood – where the Cogswell Interchange now stands – designed to connect downtown Halifax with the north end and waterfront, creating a stronger, more inclusive network of communities.

The municipality has entered into a land exchange agreement with Crombie REIT (Crombie) to facilitate the development of Granville Park, a new Transit Hub and the planned Proctor Street connection as part of the Cogswell District project.

Given the size and scope of the project, significant work happened behind-the-scenes prior to the tender being released to three-pre-approved bidders. This involved an extensive review process by multiple municipal divisions as well as engagement with external partners and agencies to help ensure the project proceeds as smoothly as possible. “With a small project team, collaboration with municipal business units has been critical to the success of the project to date,” according to John Spinelli, Project Director.

Another goal of the planning process is to ensure that the Cogswell District will be reflective of the thousands of residents who will call the area home. Procurement opportunities have been identified to include contract requirements in the tender that aim to achieve social benefits, specifically regarding workforce development and supplier diversity. To support this effort, the project team continues to regularly engage with the construction industry, and with Mi’kmaw and African Nova Scotian communities.

Congratulations to the project team on this significant accomplishment, a critical step in making future milestones a reality.

More information about the project can be found on halifax.ca/cogswell.